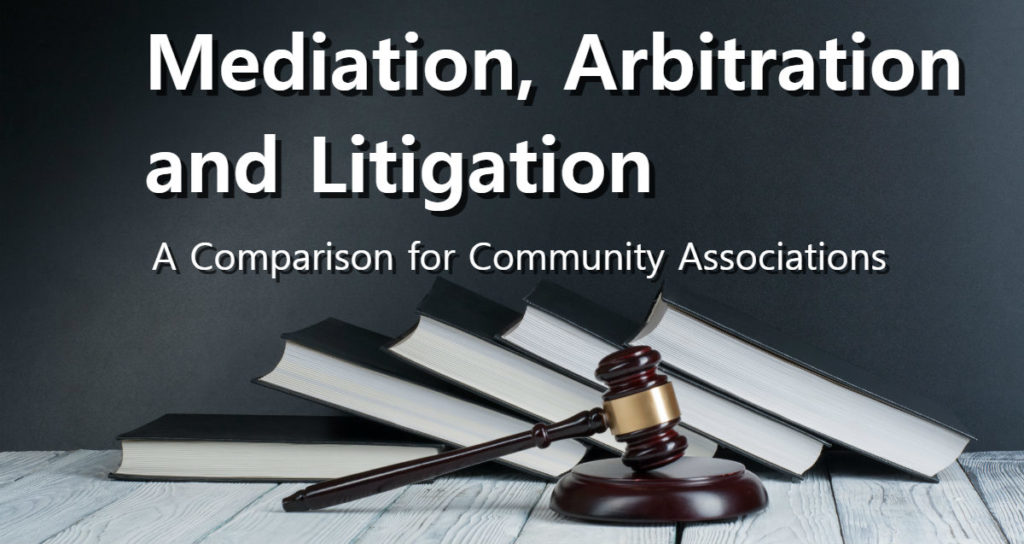 A Comparison for Community Associations

When community associations become embroiled in legal disputes, there are three main methods of resolution: mediation, arbitration, and litigation.  Mediation is a non-binding process where a neutral third party attempts to assist the parties in reaching a voluntary resolution of their dispute.  In contrast, litigation and arbitration are both binding proceedings where a private arbitrator, judge, or jury decide how the dispute is to be resolved. These three methods of dispute resolution are discussed below.

Mediation is a process in which parties agree upon a mediator, often a retired judge, to help them resolve their dispute. Mediation may also be imposed on parties by contract or a court. Mediation is unique because, unlike arbitration and litigation, the mediator cannot force a resolution upon the parties.

Typically, mediation consists of each party submitting a written statement to the mediator regarding the nature of the dispute and the basis for their claim or defense, along with any supporting documentation.    Thereafter, the mediator will convene the parties for a meeting.  At the meeting, the parties are usually separated by the mediator, who then discusses the strengths and weaknesses of each party’s case and proposals for resolution of their dispute. The mediator does not have the power to force the parties to enter into an agreement. Both sides must agree on the resolution, which is then then documented in a written settlement agreement.

If successful, mediation is typically the most cost effective and time efficient manner of resolving a legal dispute. If the parties cannot agree upon a resolution, they usually proceed with binding dispute resolution.

In arbitration, the parties select an arbitrator to oversee the arbitration proceedings and resolve the dispute. Prior to a hearing before the arbitrator, the parties exchange information and documents regarding the dispute. The exchange of information is less formal than in litigation, and usually less costly. Thereafter, the arbitrator holds a hearing where each side has the opportunity to present testimony and evidence for consideration.  Witnesses are subject to cross examination, but many of the formal requirements of the rules of evidence applicable in a court of law are not enforced in favor of simplicity and expediency of the hearing.  After the hearing concludes, the arbitrator issues a decision in writing. The decision may include an award of attorneys’ fees and the cost of arbitration, if provided by a contract mandating arbitration. Parties to arbitration must be mindful that while it is possible to appeal an arbitration decision to a court of law, such appeals are rarely successful.

An advantage of arbitration is that the parties have control in selecting the arbitrator who will decide their dispute. Additionally, the overall cost and time commitment is usually less than with litigation, even after paying the arbitrator’s fee.

Litigation is the process of filing and prosecuting a lawsuit in a court of law.  Litigation culminates in a trial, where the fact-finder, either a judge or jury, decides the outcome of the dispute.  Prior to trial, the parties exchange information regarding the dispute, known as discovery.

At trial, each party has the opportunity to present testimony and evidence to the judge and jury for consideration.  Witnesses are subject to cross-examination from the opposition. The judge decides issues of law and the jury decides issues of fact. If no jury is selected, then the judge decides issues of both law and fact. At the end of the trial, a final decision is rendered by a judge’s order or jury verdict.  In some cases, an applicable contract or statute permits the award attorneys’ fees to the prevailing party at trial. The outcome of a trial may be appealed regarding legal errors.  An appeal is not an opportunity to re-try or present new facts, but rather an argument to a higher court that there was an error in the application of the law.

Litigation is the most formal method of dispute resolution with relatively well- defined rules and procedures for obtaining information and documents from both parties and non-parties and for presenting the case to the judge or jury.  Many aggrieved parties also prefer presenting their case to a jury of peers, rather than a judge or arbitrator.

In most cases where the parties pursue arbitration or litigation, the legal dispute is settled before the arbitration hearing or trial occurs. The presence of a looming, adversarial proceeding often motivates parties to resolve their dispute by agreement rather than risking an adverse ruling by an arbitrator, judge, or jury.

Note about Author:  Patrick Ewing, an attorney in the law firm Cowie & Mott, P.A., with a focus on construction, business and community association law. This article also appears in the November 2018  issue of the Quorum published by the Community Associations Institute, Washington Metro Chapter, under the title: “ Mediation, Arbitration, & Litigation: A Comparison for Community Associations.” 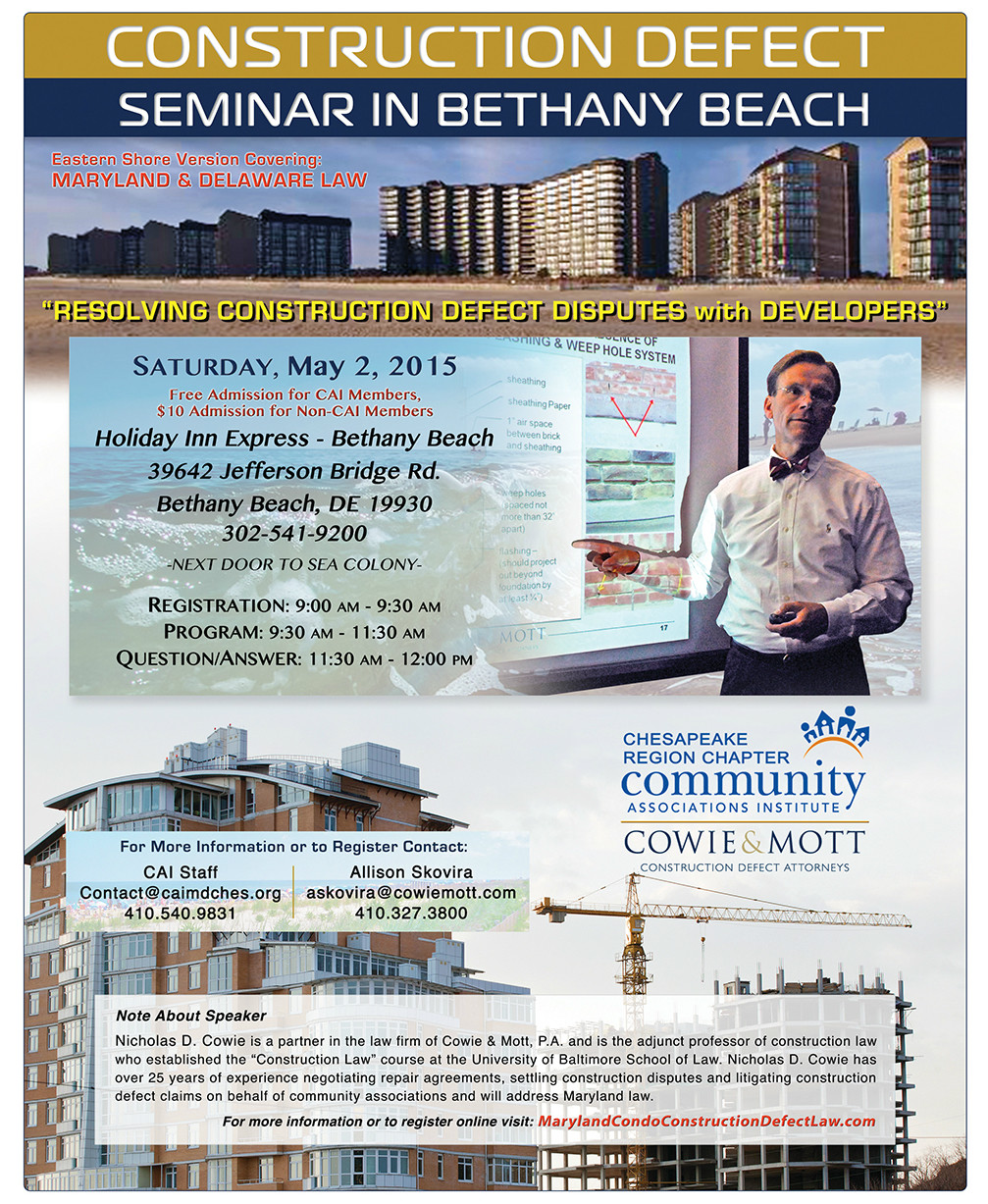