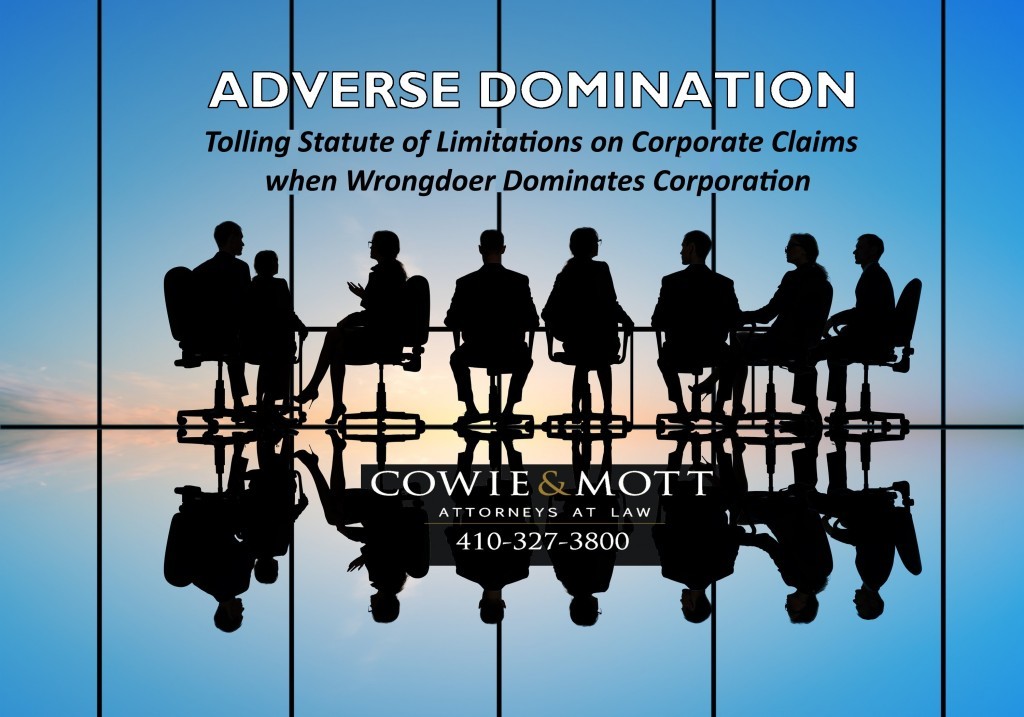 This article provides an introduction to the doctrine of adverse domination, a legal theory that, in some cases, can effectively “resurrect” a corporate legal claim that might otherwise be barred by the statute of limitations.

Introduction: Statute of Limitations and the Discovery Rule

The Doctrine of Adverse Domination

There are a variety of legal theories under which courts will toll, that is stop, the running of the statute of limitations, or deem that it is prevented or delayed from accruing or commencing based on the factual circumstances of a given case. One of these theories is known as the adverse domination doctrine, which generally applies to corporate claims against directors and officers who have harmed a corporation or other legal entity (such as a limited liability company). When this doctrine applies the claims against the wrongdoing directors and officers do not accrue while they are in control the corporation.

In the case of Hecht v. Resolution Trust Corp., 333 Md. 324, 339-49 (1994), the Maryland Court of Appeals adopted the doctrine of adverse domination finding it consistent with existing Maryland law. The court held that the statute of limitations on a corporation’s legal claim “against its directors and officers for injuries to the corporation” did not accrue, or begin to run, while “the culpable directors constituted a majority of the board of directors.” Hecht at 352. Thus, unless rebutted (as discussed below) there is a presumption that accrual cannot occur until after the culpable directors have been replaced by disinterested directors “in control of the corporation.” Hecht at 352. The doctrine applies to claims belonging to the corporations as well as the claims of individual shareholders. See, Shah v. HealthPlus, Inc., 116 Md.App. 327, 339-340 (1997).

Rationale for the Adverse Domination Doctrine

The adverse domination doctrine is based on the recognition that “it is unrealistic to expect that [the wrongdoers] will either facilitate discovery of a claim or assert a claim against themselves in favor of the corporation. Such actions are clearly adverse to their own interests….” Hecht at 345 . The Hecht decision recognizes the practical reality that an adversely dominated board will not sue itself and should not be allowed to argue that the statute of limitations accrued or expired under its watch.

The adverse domination doctrine is analogized to and consistent with the principle of Maryland agency law known as the “adverse interest exception” under which the knowledge of an agent whose interests are adverse to the principal cannot be imputed to the principal. Hecht at 345. The doctrine extends the discovery rule to situations in which a corporation is prevented from discovering a cause of action because there is no one who has the knowledge, ability, and motivation to act for the corporation. Hecht at 351. It goes beyond the principles of agency law by providing a rebuttable presumption that a corporate plaintiff cannot have knowledge of wrongdoing by directors when they are in control of the corporation and, therefore, there can be no accrual of the statute of limitations based on discovery until after control is relinquish or terminated. Hecht at 351. This presumption is rebuttable by showing someone other than the wrongdoing directors had knowledge of the basis for the corporate legal claims, combined with ability, and motivation to bring suit during the period of culpable director control. Hecht at 352.

Expansion of the Adverse Domination Doctrine in Maryland

There are many complex legal nuances applicable to the adverse domination doctrine, including varying versions of the doctrine with specific legal elements, exceptions and expansions adopted by other jurisdictions that have yet to be considered by the Maryland appellate courts. For example, precedent from other jurisdictions opens the door for the logical application and extension of the doctrine in Maryland to third parties who are not members of the wrongdoing board of directors. See, e.g., Alexander v. Sanford, 181 Wash. App. 135, 176, 325 P.3d 341, 365 and FN 26, 33 (stating that doctrine of adverse domination can toll the accrual of unit owner vicarious liability claims against a third party developer / builder of condominium based on actions taken by developer-appointed directors of condominium association who allegedly concealed and misrepresented the existence of condominium construction defects and failed to take action to address those defects), petition for review granted, 339 P.3d 634 (2014); Lease Resolution Corp. v. Larney, 308 Ill. App.3d 80, 241 Ill.Dec. 304, 719 N.E.2d 165 (Ill.Ct.App.1999) (applying adverse domination to toll accrual of claims against third parties who act as board members’ co-conspirators).

Anyone seeking to pursue legal claims on behalf of a business entity should seek an immediate legal consultation from one of the experienced Maryland business attorneys at Cowie & Mott, P.A. for purposes of determining all applicable statute of limitations time periods within which suit must be filed in order to preserve those claims. Different legal claims can have different statutes of limitations periods accruing at different times so a comprehensive evaluation is warranted to ensure that all claims are pursued in a timely fashion. Time is of the essence.

Finally, any business seeking to rely on the doctrine of adverse domination should seek legal advice from experienced Maryland business attorneys to determine the doctrine’s potential applicability to the facts as a legal basis for tolling the accrual of the statute of limitations.