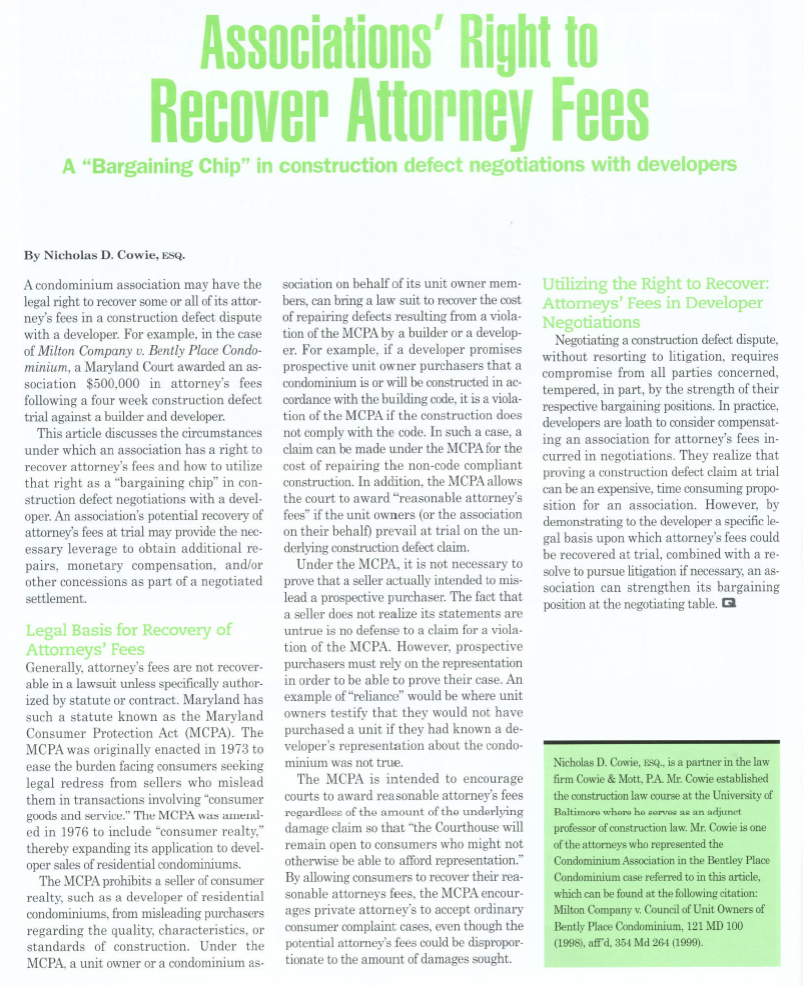 A “BARGAINING CHIP” IN CONSTRUCTION DEFECT NEGOTIATIONS WITH DEVELOPERS

This article discusses the circumstances under which an association has a right to recover attorney’s fees and how to utilize that right as a “bargaining chip” in construction defect negotiations with a developer. An association’s potential recovery of attorney’s fees at trial may provide the necessary leverage to obtain additional repairs, monetary compensation and/or other concessions as part of a negotiated settlement.

Generally, attorney’s fees are not recoverable in a lawsuit unless specifically authorized by statute or contract. Maryland has such a statute known as the “Maryland Consumer Protection Act” (“MCPA”). The MCPA was originally enacted in 1973 to ease the burden facing consumers seeking legal redress from sellers who mislead them in transactions involving “consumer goods and services”. The MCPA was amended in 1976 to include “consumer realty” thereby expanding its application to developer sales of residential condominiums.

The MCPA prohibits a seller of consumer realty, such as a developer of residential condominiums, from misleading purchasers regarding the quality, characteristics or standards of construction. Under the MCPA, a unit owner or a condominium association on behalf of its unit owner members, can bring a law suit to recover the cost of repairing defects resulting from a violation of the MCPA by a builder or a developer. For example, if a developer promises prospective unit owner purchasers that a condominium is or will be constructed in accordance with the building code, it is a violation of the MCPA if the construction does not comply with the code. In such a case, a claim can be made under the MCPA for the cost of repairing the non-code compliant construction. In addition, the MCPA allows the Court to award “reasonable attorney’s fees” if the unit owners (or the association on their behalf) prevail at trial on the underlying construction defect claim.

Under the MCPA it is not necessary to prove that a seller actually intended to mislead a prospective purchaser. The fact that a seller does not realize its statements are untrue is no defense to a claim for a violation of the MCPA. However, prospective purchasers must rely on the representation in order to be able to prove their case. An example of “reliance” would be where unit owners testify that they would not have purchased a unit if they had known a developer’s representation about the condominium was not true.

Utilizing the Right to Recover Attorney’s Fees in Developer Negotiations

Negotiating a construction defect dispute, without resorting to litigation, requires compromise from all parties concerned, tempered, in part, by the strength of their respective bargaining positions. In practice, developers are loath to consider compensating an association for attorney’s fees incurred in negotiations. They realize that proving a construction defect claim at trial can be an expensive, time consuming proposition for an association. However, by demonstrating to the developer a specific legal basis upon which attorney’s fees could be recovered at trial, combined with a resolve to pursue litigation if necessary, an association can strengthen its bargaining position at the negotiating table.

Nicholas D. Cowie, Esq. is a partner in the law firm Cowie & Mott, P.A. Mr. Cowie established the construction law course at the University of Baltimore where he serves as an adjunct professor of construction law. Mr. Cowie is one of the attorneys who represented the Condominium Association in the Bentley Place Condominium case referred to in this article, which can be found at the following citation: Milton Company v. Council of Unit Owners of Bently Place Condominium, 121 MD 100 (1998), aff’d, 354 Md 264 (1999).