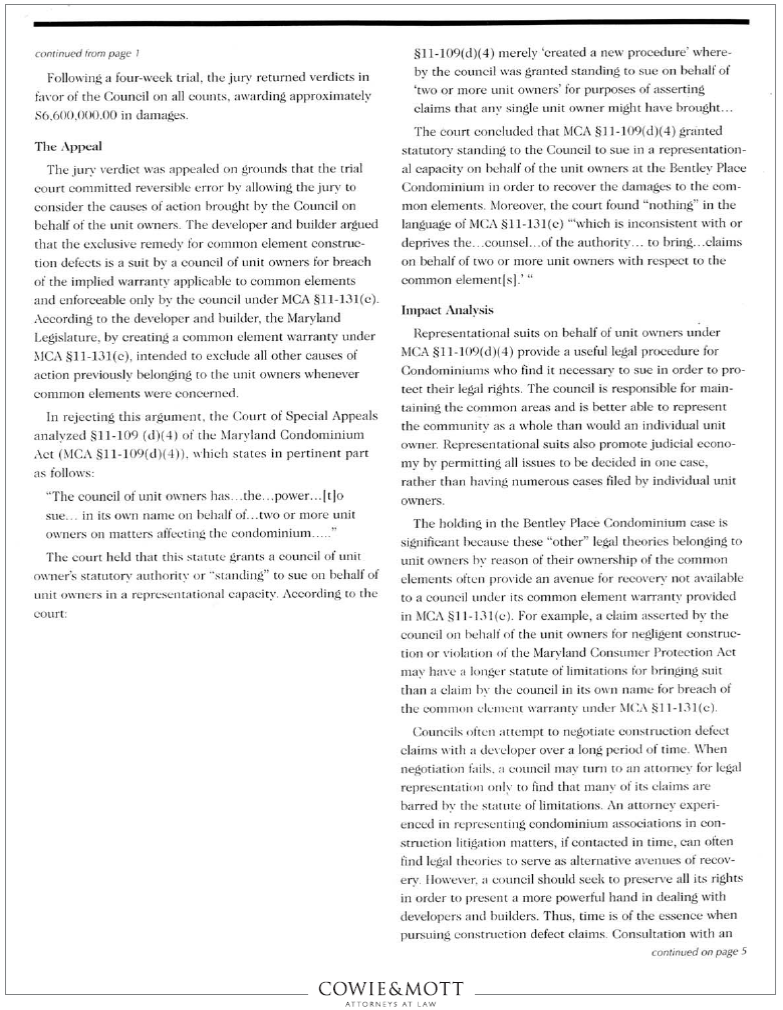 In a recent opinion, The Milton Company v. Council of Unit Owners of Bentley Place Condominium, 121 Md. App. 100 (1998), the Court of Special Appeals of Maryland, the state’s second-highest appellate court, held that a council of unit owners in a construction defect case has statutory authority to sue for any legal claims that the unit owners themselves could have asserted in order to recover damages resulting from construction defects in the common areas. The court rejected the arguments of the developer and builder that a council of unit owner’s authority to sue for construction defects is limited to claims for breach of the implied condominium warranty on the common elements provided for in §11-131 (c) of the Maryland Condominium Act (MCA §11-131(c)). IN effect, the court recognized that the condominium form of ownership is entitled to the same rights and protections that are available to other Maryland homeowners who seek to enforce their claims against developers and builders for construction defects.

The Bentley Place Condominium is a residential condominium development consisting of approximately 240 units located in Montgomery County. The Council of Unit Owners of Bentley Place Condominium (the Council) filed suit against the developer and builder of the condominium for alleged construction defects in the common areas, such as leaking roofs, defective sound proofing, undersized cathedral beams and uninsulated sprinkler pipes which froze, broke and flooded units.

The trial judge allowed the case to go to the jury under several legal theories or causes of action asserted by the Council. First, the court permitted the Council to bring a cause of action on its own behalf under MCA §11-131(c) which specifically gives a council a statutory cause of action for breach of implied warranty for common elements defects. Second, the trial court also permitted the Council to bring a number of other causes of action on behalf of the unit owners, also for common elements defects. These “other” causes of action consisted of claims for negligent construction, breach of contract, negligent misrepresentation, violation of the Maryland Consumer Protection Act, and breach of express and implied warranties generally applicable to the sale of new homes under §10-202 and §10-203 of the Maryland Real Property Code.

Following a four-week trial, the jury returned verdicts in favor of the Council on all counts, awarding approximately $6,600,000.00 in damages.

The jury verdict was appealed on grounds that the trial court committed reversible error by allowing the jury to consider the causes of action brought by the Council on behalf of the unit owners. The developer and builder argued that the exclusive remedy for common element construction defects is a suit by a council of unit owners for breach of the implied warranty applicable to common elements and enforceable only by the council under MCA§11-131(c). According to the developer and builder, the Maryland Legislature, by creating a common element warranty under MCA §11-131(c), intended to exclude all other causes of action previously belonging to the unit owners whenever common elements were concerned.

The court held that this statute grants a council of unit owners’ statutory authority or “standing” to sue on behalf of unit owners in a representational capacity. According to the court:

§11-109(d)(4) merely ‘created a new procedure’ whereby the council was granted standing to sue on behalf of ‘two or more unit owners’ for purposes of asserting claims that any single unit owner might have brought….

The court concluded that MCA §11-109(d)(4) granted statutory standing to the Council to sue in a representational capacity on behalf of the unit owners at the Bentley Place Condominium in order to recover the damages to the common elements. Moreover, the court found “nothing” in the language of MCA §11-131(c) “which is inconsistent with or deprives the…council…of the authority… to bring… claims on behalf of two or more unit owners with respect to the common element[s].’”

Representation suits on behalf of unit owners under MCA§11-109(d)(4) provide a useful legal procedure for Condominiums who find it necessary to sue in order to protect their legal rights. The council is responsible for maintaining the common areas and is better able to represent the community as a whole than would an individual unit owner. Representational suits also promote judicial economy by permitting all issues to be decided in one case, rather than having numerous cases filed by individual unit owners.

The holding in the Bentley Place Condominium case is significant because these “other” legal theories belonging to unit owners by reason of their ownership of the common elements often provide an avenue for recovery not available to a council under its common element warranty provided in MCA § 11-131(c). For example, a claim asserted by the council on behalf of the unit owners for negligent construction or violation of the Maryland Consumer Protection Act may have a longer statute of limitations for bringing suit than a claim by the council in its own name for breach of the common element warranty under MCA §11-131(c).

Councils often attempt to negotiate construction defect claims with a developer over a long period of time. When negotiation fails, a council may turn to an attorney for legal representation only to find that many of its claims are barred by the statute of limitations. An attorney experienced in representing condominium associations in construction litigation matters, if contacted in time, can often find legal theories to serve as alternative avenues of recovery. However, a council should seek to preserve all its rights in order to present a more powerful hand in dealing with developers and builders. Thus, time is of the essence when pursuing construction defect claims. Consultation with an attorney should be sought at the outset. An attorney can take action to “toll” or stop the statute of limitations from running on the council’s claims while attempts are made to negotiate a resolution of the dispute prior to litigation.

It should be noted that the developer and builder in the Bentley Place Condominium case have appealed the decision to Maryland’s highest appellate court, the Maryland Court of Appeals. The Suburban Maryland Building Industry Association has filed an Amicus Curia Brief with that court in support of the developer and builder in an effort to have this ruling overturned. As of the time of writing of this article, the Maryland Court of Appeals has not yet rendered its opinion.

Nicholas D. Cowie, Esq. is a CAI member and managing partner in the law firm of Cowie & Mott, P.A. He is also an adjunct professor of construction law at the University of Baltimore School of Law. Mr. Cowie is one of the attorneys who represented the Council of Unit Owner in the Bentley Place Condominium case.