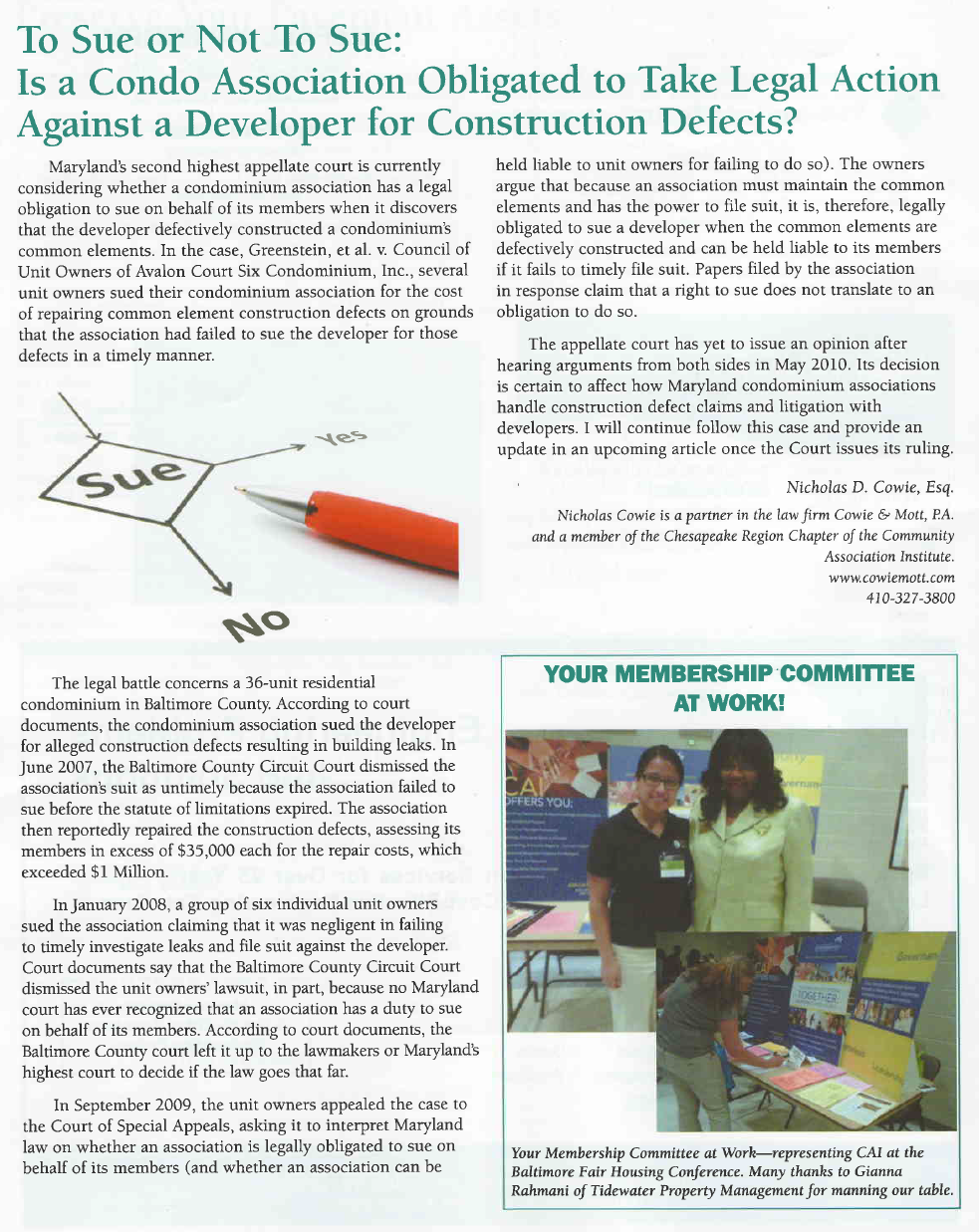 TO SUE OR NOT TO SUE: IS A CONDO ASSOCIATION OBLIGATED TO TAKE LEGAL AGAINST A DEVELOPER FOR CONSTRUCTION DEFECTS?

Maryland’s second highest appellate court is currently considering whether a condominium association has a legal obligation to sue on behalf of its members when it discovers that the developer defectively constructed a condominium’s common elements. In the case, Greenstein, et al. v. Council of Unit Owners of Avalon Court Six Condominium, Inc., several unit owners sued their condominium association for the cost of repairing common element construction defects on grounds that the association had failed to sue the developer for those defects in a timely manner.

The legal battle concerns a 36-unit residential condominium in Baltimore County. According to court documents, the condominium association sued the developer for alleged construction defects resulting in building leaks. In June 2007, the Baltimore County Circuit Court dismissed the association’s suit as untimely because the association failed to sue before the statute of limitations expired. The association then reportedly repaired the construction defects, assessing its members in excess of $35,000 each for the repair costs, which exceeded $1 Million.

In January 2008, a group of six individual unit owners sued the association claiming that it was negligent in failing to timely investigate leaks and file suit against the developer. Court documents say that the Baltimore County Circuit Court dismissed the unit owners’ lawsuit, in part, because no Maryland court has ever recognized that an association has a duty to sue on behalf of its members. According to court documents, the Baltimore County court left it up to the lawmakers or Maryland’s highest court to decide if the law goes that far.

In September 2009, the unit owners appealed the case to the Court of Special Appeals, asking it to interpret Maryland law on whether an association is legally obligated to sue on behalf of its members (and whether an association can be held liable to unit owners for failing to do so). The owners argue that because an association must maintain the common elements and has the power to file suit, it is, therefore, legally obligated to sue a developer when the common elements are defectively constructed and can be held liable to its members if it fails to timely file suit. Papers filed by the association in response claim that a right to sue does not translate to an obligation to do so.

The appellate court has yet to issue an opinion after hearing arguments from both sides in May 2010. Its decision is certain to affect how Maryland condominium associations handle construction defect claims and litigation with developers. I will continue follow this case and provide an update in an upcoming article once the Court issues its ruling.